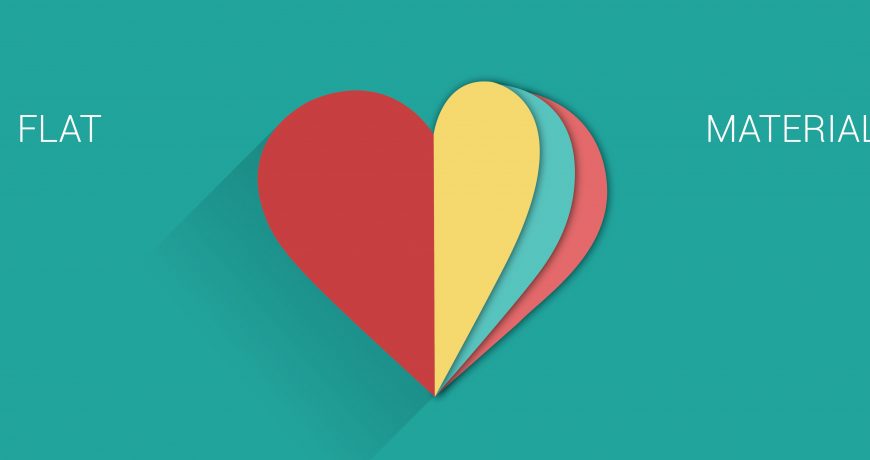 In the mid of nineties’ the concept of flat design bump into the world of web development which was first acknowledged publicly by Microsoft by using Flat UI design and their metro design together. Later on, the adaption of flat UI was followed by Apple and many other companies to make their website decent and presentable.

Now let me spill some beans on what flat UI is actually about? So it is the design which contains feasible shapes, gradients, and solid colors. It uses purely 2-dimensional effects. And all the simple UI component which can deliver information at the shortest and easiest.

But do you know how does flat UI works in the development of a website?

The main purpose of UI is to guide the user through the website or application. Flat UI reflects this role in a very different way from its predecessor, skeuomorphic design.

The skeuomorphic design uses visible and auditory indications to tell the user about how it works. By comparing it to an analog item that is made to do the same task. Flat UI design becomes popular when skeuomorphism stopped being necessary. Skeuomorphism is the design style that uses realistic images of analog objects to show users how programs that approximate these analog objects work. Skeuomorphism can also use auditory and tactile cues to attain this same goal. Some examples of these are a shutter sound programmed into a camera app and the procedure of highlighting text on a screen by pulling your finger onto it like you’re using a highlighter on paper.

Flat UI takes the user by the hand and counsel them through the application website. Making it feel like an immersive, perceptive experience.

In the current era, we see flat UI in so many places that we many times don’t even notice it. Which is the whole matter? This practice has gone far beyond user interface design to contain an illustration, advertising, logo design and more. Flat UI is actually linked with minimum efforts. Which makes it useful for a number of graphic design and branding needs.

It’s all about newness and that’s what matters in web design these days. But can you sell your creativity alone? No, You need aids to make it visually appealing, unique, and competitive. Flat UI provides all such aids in contemporary graphic design. Few of them are as follows:

The skill of applying colors effectively is a must-have for everyone who works with visual compositions including illustrators and UI designers. Low contrast texts are no more the answer. Color theory knowledge has become even more prominent with the growing popularity of flat and material design directions. Vibrant colors enable enough of contrast helping to increase readability and legibility. Due to contrast layout elements become distinguishable and noticeable. Vibrant colors and gradients are now seen in user interfaces of different digital products. From the playful and entertaining ones to business apps and websites.

How do you describe a UI button design in three words? We picked these: “action upon touch.” Indeed, the main goal of putting buttons on a website is to enable users to take action and complete one or more tasks. Register, buy, subscribe, like, follow, skip, etc. That’s why it’s vital for great button design to make these actions visible and unambiguous. Thus empowering user flow and navigation. The first thing you should bear in mind whenever you design a button is where you are going to place them. First, think over the user flow to understand the steps your users are going to make. So the placement, color contrast, typography, and style or space have to work simultaneously for this trick to be in your favor.

We often think that silence, emptiness or colorlessness is bad for us. We take them for granted without thinking that they are the solid foundation of the contrast. Only colorlessness lets us feel the colors brighter and deeper when they appear on stage. If there’s not enough space between the elements. They become hard to read and demand additional effort. It may be a strong reason for eye and brain tense although many users won’t be able to formulate the problem. A proper amount of negative space (it’s completely different from White space), especially micro space, solves this problem and makes the process more natural. So, negative space directly influences the efficiency of typography on the page or screen.

Here’s another guide that might help you regarding Typographic space: Adding space in designs

Despite its vogue, flat design also has some negative impacts regarding the user experience. The absence of three-dimensional effects (e.g., drop shadows) takes away its audience that indicates how a user can interact with a design that is in 2D in this age of virtual reality. Because the flat design name comes from its bi-dimensional qualities, as seen from the use of flat shapes and other details that allow the creation of dimension and depth. Such features include highlights, textures, and shadows.

As designers attempt to insist on the streamlined and clean qualities of flat design, some of them pay too much attention to aesthetics. This affects the usability of the flat design. It is not easy to tell what is clickable and what is not, since everything lies on a flat-screen. You cannot view critical actions and features in the name of looking for simplicity. Similarly, the designer needs to pay extra attention to typography, The wrong typography can ruin the whole design because in flat design everything is connected to each other.

However, due to this danger, flat UI has vastly applied in a more balanced way, often referred to as “flat design 2.0” or “almost flat design.” This trend grabs the neat and simple visual elements from flat UI and adds some appropriate skeuomorphic properties such as color variations and shadows. With this increased depth and dimension, visual variety increases and usability improves by the user’s perspective. For instance, Google’s Material Design and Apple’s iOS interfaces heavily use shadows and/or blurring effects to make their interfaces more intuitive to use.