What is the difference between padding and margins?

In css margin and padding are the two of the main css properties for the formating of the elements.Margin and padding seem like the same thing.But there is big differece between them.I am describing it with examples to make you understand.

Margins:
CSS margins make the vertical and horizontal areas in CSS layouts. If there is no margin and spaces around the elements they will appear at improper places and we can’t understand them easily.Margin keeps space between the box elements,CSS margins. Margins have four  properties:( margin-top, margin-bottom, margin-left, and margin-right.).Margins use for the extra space outside the border.All elements must be floated so that margins use to move the element it’s applied to, or to move other elements around it.

Padding:
Padding of an element is the horizontal and vertical space that’s set around the content areas of the targeted elements. So padding is on the inside of  the border, not the outside of the border.Padding defines the space between your content and the boarder.Padding means extra space inside the border. There are four padding properties in CSS:( padding-top, padding-bottom, padding-left, and padding-right). In a box Padding keeps space between content to border.

Difference between padding and margins: 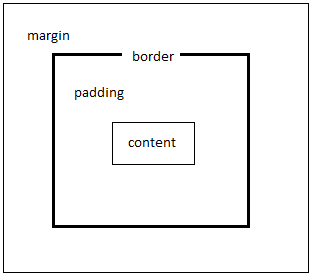